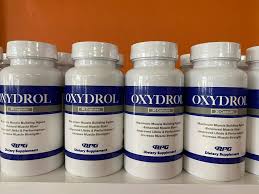 Each tablet of Oxydrol Tablets contains 50 mg of Oxymetholone hormone, and can be used both in men and women.

Like methandrostenolone (Methanodex 10), Oxydrol Tablets does not bind well to the androgen receptor (AR), and most of the anabolism it provides is via non-AR-mediated effects. It is therefore a Class II steroid and is best stacked with a Class I steroid. The drug appears to give the same benefits as Methanodex 10. Unlike Methanodex 10, however, it seems that Oxydrol Tablets is progestagenic. It has been observed to cause nipple soreness or to aggravate gynecomastia even in the presence of high dose antiestrogens, strongly suggesting that the effect is not estrogenic. That effect can be reduced by concurrent use of stanozolol (Winstrol), which is anti-progestagenic. This progestagenic effect of Oxydrol Tablets is only a concern when using aromatizing steroids. With androgens such as Primobolan, Oxydrol Tablets stacks very nicely and is a surprisingly friendly drug. In contrast, with testosterone it is a very harsh drug.

Oxydrol Tablets does not convert to estrogen, and thus antiestrogens are not required if no aromatizable AAS are being used. However, in concert with aromatizing drugs, Oxydrol Tablets is notorious for worsening “estrogenic” symptoms, possibly by producing progestagenic symptoms which the bodybuilder confuses as estrogenic, or by altering estrogen metabolism, or by upregulating aromatase.

Compared to what bodybuilders expect of it, the drug is reasonably mild when no aromatizing steroids are present. I consider its potency approximately comparable to Methanodex 10. It is not unusual for a first time user to do quite well on an Oxydrol Tablets-only cycle, but more advanced users will want to stack with another steroid. Typical use is 50-150 mg/day, which should be divided into several doses per day.

Because Oxydrol Tablets is 17-alkylated, it is stressful to the liver. It is better to limit use to no more than 6 weeks or preferably four weeks before taking a break of at least equal length. Many users feel that it is more effectively used in the beginning parts of the cycle, rather than in the last few weeks.